As promised last time! We’ll talk about the GM table part of our final project.

As I mentioned last time we don’t have access to a nice multi-touch interactive table which would be an ideal solution to our problem. But we figured out a nice placeholder until we can get one.

Our solution was to use Computer vision to track fiducial markers on a TV. Where TV would serve as the table. Displaying a map. And markers would represent the monsters. 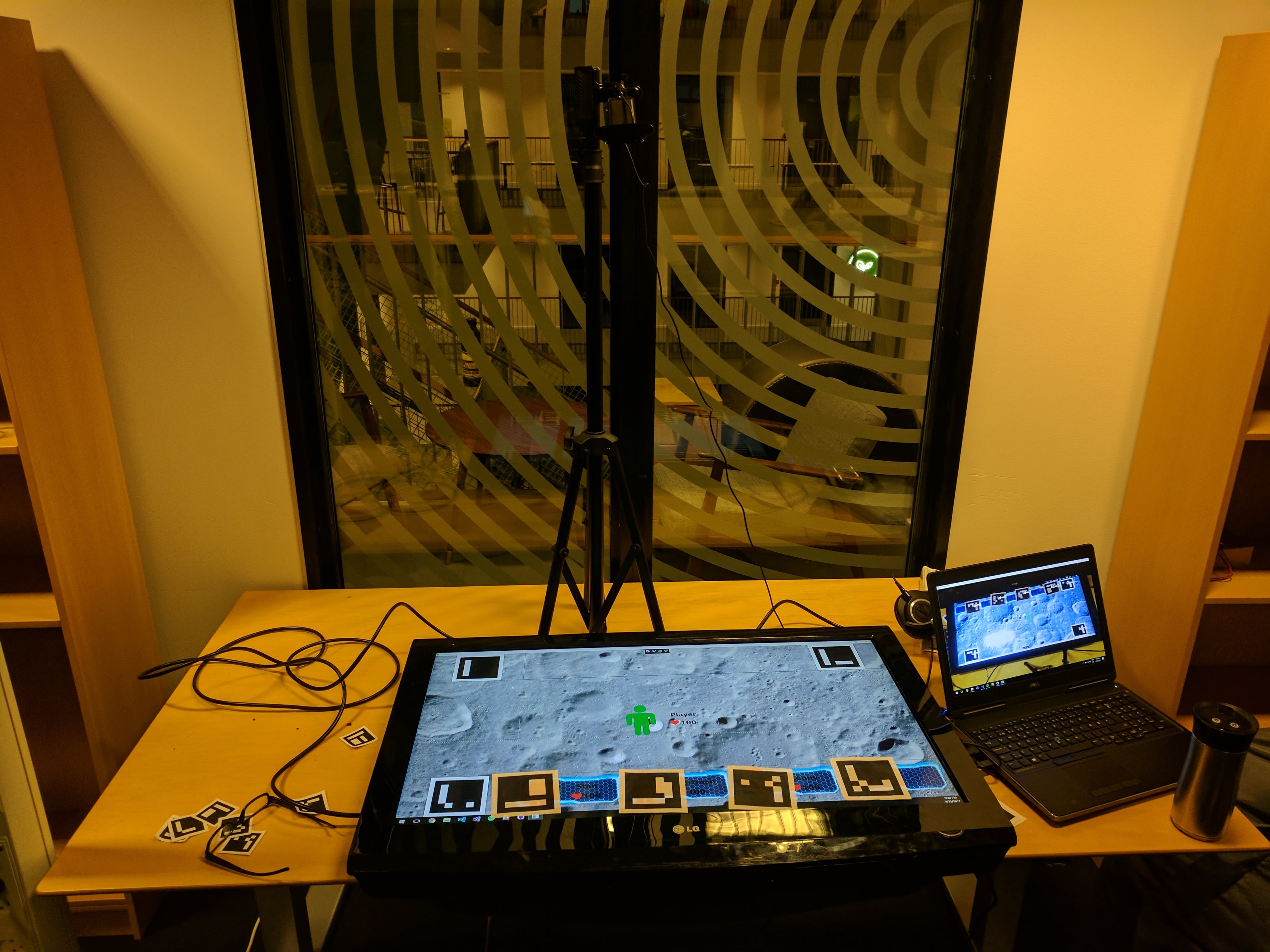 To track the markers, we used a Computer Vision library called ArUco which is a very small library build on top of OpenCV that makes tracking fiducial marker very easy. Since we ended up creating our application in WPF we used .NET wrapper library ArUco.NET that can be downloaded from NuGet. Reason we decided to go with this solution was that I was already experienced with ArUco since I successfully used it in previous projects

and thanks to that it took us less than few hours to get a very simple tracking up and running.

Rest of the application was very simple. It’s a simple WPF applications with a single grid that works as a chess board. It will open with two windows. One a WPF window that holds the map with the grid plus three markers in corners to serve as base markers that we use to estimate the relative position of the table and a second window that shows the output from the camera for debug purposes. The application is using Reactive Extension .NEt library for managing the data streams from the tracking system and a standard RabbitMQ.net client library for network connection. And taht leads me to the next part of the project.

As I mentioned in the previous blog we created two separate applications for the GM table and the VR player so that they don’t have to run on the same computer. And since one of our applications was built in unity and the other in WPF we couldn’t use Unity’s built in networking system since it only works between Unity applications. Luckily, as with most of our previous problems, this is something we have deal with at work. And since we were both experience with using RabbitMQ it wasn’t hard to decide. Especially since RabbitMQ’s own moto “Messaging that just works” is such a fitting description. Sadly, as often with Unity, many things don’t just work. Same was the case with RabbitMQ’s .NET client. Or at least until recently. And by recently, I mean about 12 days before we started our project. Someone created a AMQP client for Unity. AMQP being one of the protocols supported by RabbitMQ. The reason the official .NET client wouldn’t work is that unity (as of version 5.5.1) still only supports .NET framework 3.5. Which is severely outdated by now. And as a result, the newest RabbitMQ client doesn’t work under Unity anymore. You could get the older version of the client and cross compile it but you would be using an outdated version that is no longer supported and filled with possible bugs. But as I said. We got lucky. Someone else was facing the same issue we were and decided to fix it by updating the last version of RabbitMQ’s .NET client that builds under Unity with patches to get it up to date and fully working. This solution is not finished by any means but it already is officially listed on RabbitMQ’s website and it does contain the cross compiled .NET client that we needed. project can be found on GitHub here CymaticLabs Unity3D.Amqp. This project has a lot more functionality to it that is not done yet such a Network manager that receives messages asynchronously and then handles them on frame updates to remain thread safe with the rest of Unity’s system but we didn’t need any of this functionality and since most of the advanced functionality was unfinished at the time we were working on it we decided to make our own very simple solution.

Now that I explained our communication in a pretty low lever let me give you a high-level overview. RabbitMQ is a message broker that allows you to send messages of any type between clients of any kind as long as they support one of RabbitMQ’s wide array of supported communications protocols. I am not going to go into more detail about how exactly it works and what all it can do since I doubt I can do a better job of it than RabbitMQ’s own documentation. Simple explanation is that we serialize out objects into JSONs and send them to RabbitMQ which will than route it to any other client waiting for that kind of object where the message will be again de serialize and handled.

Since we started by running our system on two computers we used a RabbitMQ as a service provider called CloudAMQP which has a free tier allowing you to host a small RabbitMQ server online for free as long as you stay within certain criteria. later we transitioned to running our own RabbitMQ server since when we went to present our game we weren’t sure if we are going to have access to the internet and running a local server was very easy as well.